If comparing home security systems these days is a matter of “apples to apples,” then it’s also fair to say that the Xfinity Home Security System compares very favorably to the other “apples.”

What makes it so favorable? Its service offerings don’t differ greatly from many other providers. What you can expect from the Xfinity system is the convenience and product agility that occurs when home security is integrated with smart home technology. Comcast’s new Xfinity system is versatile and customizable, and smoothly combines home security and smart automation into one integrated, easy-to-use package, with mobile apps that put the power of the entire system into your hands.

The Xfinity Home app allows for seamless control of all devices, all readily accessible with the touch of a smartphone screen. And the Xfinity Home Security system is scalable; it can be integrated with any supported third-party devices (at no additional charge) and managed through the mobile app, an internet portal, or even your television. The system requires high-speed internet, though it doesn’t have to be through Comcast. System features include:

Xfinity differs from many of its competitors in terms of price structure. Customers can come on board under a stair-stepped contract beginning with a 1-year period at $29.99 a month, and $39.95 a month for the second year. The 24-month contract agreement offers security monitoring with direct connection to police, ambulance, and firefighters. It also includes door-and-window sensor packages, a motion sensor, and a wireless keypad. There is no equipment fee with the basic Xfinity service, but there is a $99 installation and monthly monitoring fee.

Sensors are 3G wireless and have a battery backup system in case of a power outage. The home touchscreen controller communicates with all connected devices as well as the central monitoring center. Customers can choose from a one-time camera purchase and live video monitoring for $199, or get indoor/outdoor security cameras (up to four) for $99 with a $9.95 per-month fee per camera, which includes video recording and 10 days’ worth of storage. 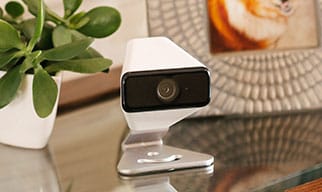 Comcast allows you to bundle home security with internet and cable, which allows you to  control your security system with a TV remote and monitor security cameras through your television via voice command. Without bundling, costs depend on the services and equipment you select. Add-on equipment includes:

Much of the new Xfinity system’s equipment has been redesigned and improved — it has a sleek new design, and it’s easier to access. For example, the old system’s door/window sensor, which had to be pried open to change the batteries, has been upgraded with a new cover that can be slid open for easier access. The battery life of many devices, including the camera, touchscreen, motion sensors, keypad, and door/window sensors, have been upgraded to 5 years.

Customers have the option to save money by using pre-existing equipment. Many third-party devices are compatible, such as Nest’s thermostat and the Lutron outlet dimmer, which can easily be integrated through the Xfinity home app, making it unnecessary to purchase and install separate Comcast devices. The possibilities for customization are also improving, because Xfinity can be adapted to a rapidly-expanding list of third-party components, controllable through a single interface. Customers’ pre-existing devices can be linked to the Xfinity system by adding the account login for each individual smart device into Xfinity’s mobile app. Supported third party products include:

The agility that homeowners get from an integration of home security and smart home technology sets the Xfinity system apart from many of its competitors. For example, customers can program a thermostat setting to “away” mode to save on energy costs, set a porch light to come on at sunset and turn off at sunrise, reset the thermostat, arm and disarm the system, and program a security camera to record a video clip when it identifies motion.

Equipment redesigns and upgrades, a growing list of supported third-party devices, and integration with smart home technology makes the Xfinity Home Secure system an appealing option for customers looking to fuse home security and smart home automation. Perhaps most importantly, Xfinity has shown that smart tech is even more effective when integrated with home security devices such as cameras, sensors, lighting, and smart locks.